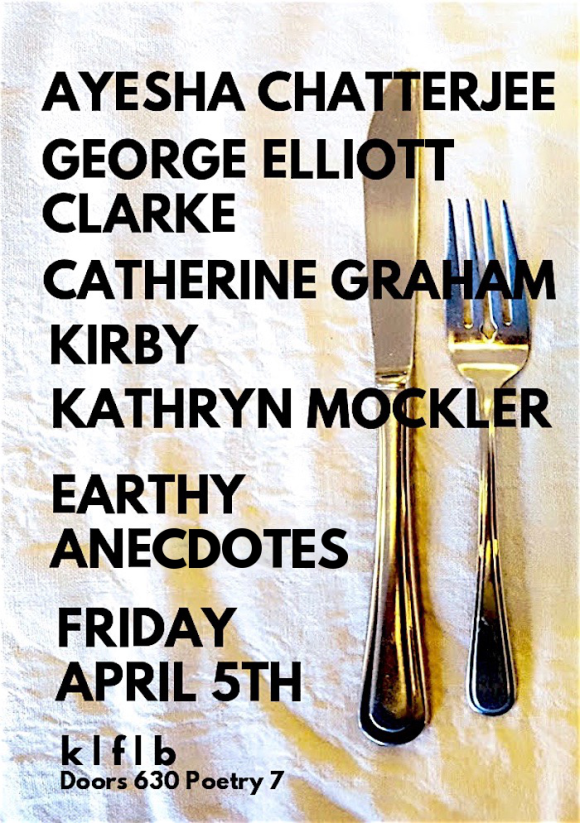 CATHERINE GRAHAM is a Toronto-based poet and novelist. Her sixth poetry collection The Celery Forest was named a CBC Best Book of the Year, appears on their Ultimate Canadian Poetry list and was a finalist for the Fred Cogswell Award for Excellence in Poetry. Michael Longley praised it as “a work of great fortitude and invention, full of jewel-like moments and dark gnomic utterance.” Her debut novel Quarry won an Independent Publisher Book Awards Gold Medal for Fiction, “The Very Best!” Book Awards for Best Fiction and was a finalist for the CAA’s Fred Kerner Book Award and 2018 Sarton Women’s Book Award for Contemporary Fiction. Winner of the Toronto International Festival of Authors Poetry NOW competition, she teaches creative writing at the University of Toronto where she won an Excellence in Teaching Award. Aether: an Out-of-Body Lyric will be published next year. Visit her at www.catherinegraham.com. Follow her on Instagram and Twitter @catgrahampoet.

KATHRYN MOCKLER is the author of four books of poetry and six short films. Her collection of stories Watch Your Head is forthcoming with Book*hug. She is the Canada Editor of Joyland: a hub for short fiction and runs private creative writing workshops.

KIRBY‘s debut collection This Is Where I Get Off (Permanent Sleep Press, 2019) follows a slew of anthologies and chapbooks including Cock & Soul, Bob’s boy, The World Is Fucked and Sometimes Beautiful, and She’s Having a Doris Day (knife fork book, 2017). They are the owner/publisher of knife | fork | book.

Born and raised in India, AYESHA CHATTERJEE has lived in England, the USA and Germany and now calls Toronto home. Her poems have appeared in journals across the world including The Missing Slate (Pakistan), The Moth (Ireland) and CV2 (Canada). She is the author of two poetry collections. A revised edition of her book, The Clarity of Distance, is forthcoming this fall with Aeolus House. Chatterjee is past president of the League of Canadian Poets.

The 4th Poet Laureate of Toronto (2012-15) and the 7th Parliamentary/Canadian Poet Laureate (2016-17), GEORGE ELLIOTT CLARKE was born in Windsor, Nova Scotia, in 1960.  Educated at the University of Waterloo, Dalhousie University, and Queen’s University, Clarke is also a pioneering scholar of African-Canadian literature.  A professor of English at the University of Toronto, Clarke has taught at Duke, McGill, the University of British Columbia, and Harvard.  He holds eight honorary doctorates, plus appointments to the Order of Nova Scotia and the Order of Canada at the rank of Officer. He is also a Fellow of the Royal Canadian Geographical Society.  His recognitions include the Pierre Elliott Trudeau Fellows Prize, the Governor-General’s Award for Poetry, the National Magazine Gold Award for Poetry, the Premiul Poesis (Romania), the Dartmouth Book Award for Fiction, the Eric Hoffer Book Award for Poetry (US), and the Dr. Martin Luther King Jr. Achievement Award.  His books are available in Chinese, Italian, and Romanian.

[…] Tonight, I read for the very first time in our glorious “new” space at the The Dark Side Studio (244 Augusta 2nd Floor) from my full-length debut (Permenent Sleep Press, out May 4th) with none other than AYESHA CHATTERJEE, CATHERINE GRAHAM, KATHRYN MOCKLER, and Poet Laureate of Canada, GEORGE ELLIOT CLA… […]

The way to heat this winter.