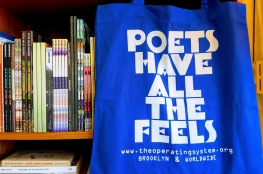 I can’t say I’m well acquainted with the independent literary scene outside Canada, but over the past few years, a small press from Brooklyn really stood out for me. The Operating System has managed to wow me over and over again with a wide selection of poetry from across the globe. Their publications have been consistently enthralling and beautifully designed, often packaged with an essay or two and a short interview with the author in the end. Whilst browsing their most recent publications, a single book stood out due to its personal significance to my past.

See, I grew up in an overpopulated metropolis in a third-world country. I was born in a small room whose outer wall was separated from a five-lane motorway by a single chain-link fence. The cacophony of motor vehicles and the toxic sediments from their exhaust pipes slowly became integrated into my sense of “Home” and “Sanctuary”; a feeling that I can never get from the sound of waves at the beach. 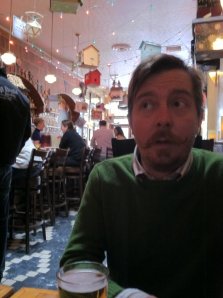 In their new book Chlorosis, Michael Flatt and Derrick Mund (pictured above, from here onwards F&M) aimed to dismantle certain flaws in our contemporary rhetoric. As modern humans, we’re surrounded by cement walls and technology. We wake up for work, commute in a steel box, breathe in exhaust smoke, wallow in garbage and then get back to our house where an HD reimagination of “Nature” might be projected.

The problem with a box

Is you can sell it

With a security-camera view of the mountains’ tracts

With the last recorded portion of our voice

In an essay towards the end of the book, F&M argue that we’ve been forced into false binaries about the world around us, forcing a schism between “Nature” and manmade structures and institutions. We’ve divided our lives into two distinct modes of life: sanctuary in “nature” and misery in the midst of anthropocentric waste.

Through Chlorosis, F&M aim to find a new way to communicate the increasing sense of helplessness towards catastrophes of greater magnitude. F&M trust contemporary poetry’s capacity to “Serve as an ideal site for radical interplays between textual disciplines” and through their book, they aim not to act as yet another book of ideological documentary, but as a source to “innovate new modes of intellectual engagement”.

When asked about the role of a poet in our society, F&M answer “The poet’s role might be to help people tune into frequencies they’re missing”.

Chlorosis paints a quite unique picture. Through this book we see nature in the city and the city in nature, we see solitude in multitudes, watch our biological functions fade into industry, into capital. We breathe in the toxicity and filter it through our bodies, struggling to articulate our ineptitude to articulate. Through our cities we explore the outdated ideals of singular selves

Biological ontology is the atomization and proliferation of a self still constituted as singular.

And little by little we assimilate into the geo-carnal truths of our society.

It is a matter of course, and as such is interpolated into the New Organic, an alloy of geobodily affect and neuroatmospheric chemistry.

Wandering the streets of our metropoli, consuming and consumed, we witness the Chlorosis.

And as we leave behind our archaic ways and merge with the New Organic, we pave new paths to the mind. The once-grotesque landscapes of industry take on new meaning, morph into poetic expression in front of our eyes. Through throbbing veins of technology we explore our bodies, and through our flesh we explore the implications of industry and capital.

There remains the positive entropy of human embrace, the predictable ebbs and flows of sensory pleasure. The heat exchanged in language is now diffuse, but you’re right, it would be cold to call these simply resource inputs.

We are as much a part of nature as we’ve have always been, and embracing the biology of our pulsating cities we embrace multitudes around us with poetry, one line at a time.

KHASHAYAR MOHAMMADI IS AN IRANIAN-BORN WRITER/TRANSLATOR BASED IN TORONTO, CURRENTLY AN EDITOR AT INSPIRITUS PRESS. THEIR MOST RECENT PUBLICATION IS MOE’S SKIN (ZED PRESS, 2018). DEAR KESTREL IS BEING PUBLISHED BY KNIFE | FORK | BOOK SPRING 2019.